The ICC World Test Championship is a league competition for Test cricket. The competition, which started on the 1st of August 2019, was the first ever World Cup for the longest format of cricket.

The talks for this championship first started in 2009. In 2010 ICC came up with a  quadrennial tournament format with the top four nations meeting in the semi-finals and the winners to meet at the final. At first, the tournament was meant to replace the 2013 ICC Champions Trophy. But seeing the popularity of the 50-over format of the Champions Trophy it was canceled. Again in 2017 WTC was canceled for the 50-over ICC Champions Trophy. It was only in 2019 when WTC  began with the 2019 Ashes series. The tournament comprised of the top nine test playing teams i.e. Australia, Bangladesh, England, India, New Zealand, Pakistan, South Africa, Sri Lanka, and the West Indies. Each team had to play three home and three away series. In total 72 matches were scheduled into 27 series over a 2 year period. At the end of the league phase, the top two teams were to meet for the finals in England in June 2021 with the winner named as the Test Champion!

A Test Championship had become too important to conduct to preserve the popularity of the longest format of the game. WTC gave more meaning to bilateral Test cricket as games in a series would count for points as the world’s best  teams go head to head.

The COVID-19 pandemic impacted international cricket fixtures, including matches in the Championship, which could not resume  before July 2020, with several rounds of matches being postponed or ultimately cancelled. Fortunately  India was able to complete its share of matches and topped the table, but most of the teams could not. Thus ICC  adopted a percentage points system for the final rankings. This is how the points table looked at the end of the  league phase. 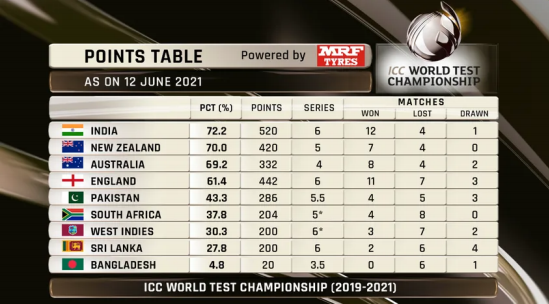 The Rose Bowl Stadium in Southampton, England hosted the first edition of WTC which took place from June 18- June 22. The Kiwi team reached England early, to play a two-match bilateral Test series against the hosts. The Indian  Cricket Team, on the other hand, landed in Southampton on June 3rd after serving a quarantine period of almost 10  days in India. The finalists Team India and New Zealand were girding themselves to strike the balance between the bat  and the ball before the decisive encounter.

The recent form of the Kiwis’ against England was fantastic. Devon Conway and Tim Southee performed well in  their respective batting and bowling department. Also ICC had made it clear  that if the final ends in a draw both the teams will  be declared as joint winners and an extra day i.e. a 6th day may be taken if the allotted 450 overs are not completed  in 5 days. In England’s overcast conditions and the Southampton pitch, the Black caps might have had an edge in bowling as compared to India. Also since the 2013 Champions Trophy win, team India had not won any ICC Trophy, although they finished at the top in most of the tournaments in the league phase, which is also the case in WTC. Thus, could  Team India break this streak? Could we see the first ICC Championship to have joint winners? Would the match continue  till the 6th day? In 2007 India did win the first ever T20 World Cup, could India repeat that to win the first WTC? Would  India give a pay back for the 2019 semi-finals?

Too many questions, only one answer, we had to watch out!

After a 144 year wait, Test cricket finally got its champion New Zealand! India, being a top side for almost five years  now and also finishing at the top in the league phase lost the ultimate test. New Zealand sealed the win by 8 wickets  after a comfortable chase in the 2nd innings. It was a real test for both the teams as New Zealand did not win any  ICC trophy since 2000 and India could not defeat New Zealand in ICC Tournaments since 2003.

The match clearly got intense as the days progressed and the unpredictable weather caused a lot of pauses in the  Indian innings making batting a little difficult. Kyle Jamieson and Captain Williamson shone in the first innings making  it hard for the Indian team to keep up with the match. With all the action in the last five days it was all now dependent on  the 6th day for the results. India was down with two wickets  on the final day and it was on captain Kohli and team to put up a  respectable total on the board before the final New Zealand chase. But the lack of a clear strategy on whether to play  defensive or attack the bowlers on India’s part and a well-planned bowling scheme by the Black Caps, stopped India  at only 138 runs. With about 52 overs remaining for the day captain Williamson and Ross Taylor ensured New  Zealand’s win. It felt like India desperately needed the Rain God’s help in the last session.

The New Zealand  sun rose with their victory. This is the start of a new era of test cricket. We have to watch  out again in 2023 when the WTC circle comes around after a 2 year long cycle.