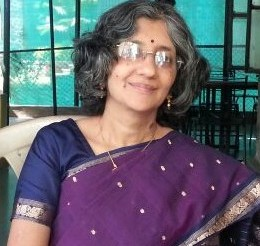 Dr. Deepti Gangavane, author of several research papers and books, was the Department Head for philosophy at Fergusson College. Upon joining the students of Gokhale Institute, she expressed her delight in sharing the wealth of her philosophical knowledge with aspiring economists.

According to her, to understand philosophy, we must understand what it is not. She tells us, “Philosophy is not to be confused with spirituality and spiritual discourses that people give, it is not to be confused with personal world views”. Religion is not Philosophy because it is based on faith humans have used our vivid imagination to come up with answers to absolute questions similar to those we ask in philosophy but they are not rational. Philosophical arguments are based on reason and one always has the “freedom of rejection”. Similarly, she points out that the key difference between philosophy and other sciences is that they use empirical methods. She then goes on to define Philosophy as an “ancient discipline that cannot be studied with a capital P” because there are multiple philosophies born out of the influence of various factors.

She elucidates how humanity has arrived to this field of study. She says humans go beyond the mere necessities required for survival. It is human exquisiteness that forces us to question everything. And that is exactly the reason why as students we should be interested in philosophy, our curiosity is our driving force. And it is precisely the questioning which makes philosophy “The Mother of all Sciences”. That is why the highest academic degree awarded is called a Ph.D. (Doctor of Philosophy). Originally, the questions raised were under the philosophical domain and as more empirical methods of observation and experimentation developed the areas occupied by philosophy were given away to specific sciences. Dr. Deepti gives us an example of Newton. He published his Laws of Motion manuscript under the title “Mathematical Principles of Natural Philosophy”. The most recent child of philosophy would be psychology, which is a few decades old.  She humorously puts philosophy as “A mother abandoned by her children ”. She then moves on to speak about the 3 pertinent questions asked by philosophers since ancient times, all other questions leading back to them.

And within these 3 questions of knowing and doing, philosophy reduces anything and everything. These questions have also led to the development of 3 different disciplines:

Here we are concerned with our values, actions, and intentions. How do we define good?

After providing a brief insight on the various topics, she answered the questions put up by the students:

Q) So according to you, what is real? And would you consider everything ‘material’ to be real?

A) So, for me, the central value of philosophy is in raising questions. However, giving answers is not our job. like I said we provide directions for finding answers but we hardly provide answers because we never even claimed that this is the answer. Also, be careful while asking a question because if the concepts used are ambiguous and confused then it’s very difficult to find the answer. I am these days tending towards scientific materialism in characterizing reality but at the same time, I do not completely reject the possibility of there being something beyond matter which is technical. Philosophical terms are called transcendental, to transcend is to go beyond.

Q) This is about a tactical thing, can’t we turn the fact that we’ve discovered that matter can be turned into energy, e is equal to mc square, but then if it happens backward as well you can’t really feel energy neither can you see it nor smell it but it is I mean if it can turn into the matter which we are basing our perceptions on and that entire system kind of breaks down I think.

A)Some scientific methodologies make a very important distinction between theoretical and observational terms. Certain terms that science uses and what they denote can actually be observed but there are certain terms that refer to things that cannot be observed like, the law of gravity.

Q) Whom do you believe in rationalists or empiricists?

A) Rationalists are those people or those philosophers who believe that all knowledge has to begin with reason and experience comes later and the empiricists are those who would say that all knowledge begins with experience reason comes later and organizes. I do not accept either rationalism or empiricism. I am a Kanteen in that respect. Kant also feels that some things transcend the limit of my sense perception, however, all the scientific knowledge or any other kind of knowledge that we have is an outcome of my senses working together.