India breaks the 26 match winning streak of the Aussies

The Indian women’s cricket team toured Australia to play a total of 7 matches “including 3 ODIs, 1 Pink Ball Test and 3 T20Is.” The first two ODIs were won by the Aussies. India had not won even a single ODI in the last 26 games played between the two nations.

But it was the third ODI of this tour that was a testament to the fact that Indians should never be underestimated. The match was played at MacKay with Australia winning the toss and choosing to bat first. In the first innings, Ashleigh Gardner and Beth Mooney scored 67 and 52 runs respectively to get Australia to a respectable total of 264 runs. India’s Jhulan Goswami and Pooja Vastrakar also picked up 3 wickets each.

The second innings wherein India was to bat, started with Shafali Verma’s explosive batting contributing 56 runs to the scoreboard and later it was the young Yastika Bhatia who added another 64 . Although there were runs being scored, Australia’s Annabel Sutherland was striking wickets. But it was the short cameo done by Deepti Sharma and Sneh Rana that got India close to victory.

The match was a last-over thriller. It was the veteran and experienced Jhulan Goswami who hit a four on the 3rd ball of Sophie Molineux’s over to hand India a record breaking win. The runs chased by India in this match were the second highest runs by a team in women’s cricket in the 50 over format. 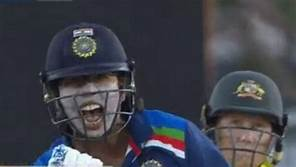 Jhulan Goswami after hitting the four and winning India the match after 26 straight losses in ODIs.

Not only did Jhulan win India the match but she was also presented with the “Player of the Match” award. The Indian cricket team also won the hearts of the country’s people by winning the nerve wracking match. Although it was the Australian cricket team that won the series, it is evident that the Indian women’s cricket squad showed us that they are no less than the top cricketing nations. They were also praised by many cricketers for their brilliant performance.

The spirit of persistently playing  despite losing previously can be seen in this play of the Indian women’s cricket team. Therefore showing us how Women’s cricket is no less interesting than that of Men’s cricket.

BSc@GIPE > The 8:10 Newsletter > HOME > India breaks the 26 match winning streak of the Aussies