Djokovic Vs. Australia: A Covid Saga

As of 10th January 2022, Novak Djokovic is being held in an immigration detention center in Australia as his lawyers continue to appeal the Australian federal government’s decision to revoke his visa. It is quite the unusual situation the nine-time Australian Open winner has landed himself in. An open anti-vaxxer, Djokovic has been unable to enter the country due to an apparent violation of the country’s strict rules with regards to Covid vaccination and entry protocols.

Having previously received a medical exemption for playing in the Australian open, Djokovic landed in Melbourne where he was detained and questioned by Border Force who rejected his visa for lack of substantial evidence for medical exemption. His lawyers have since been appealing to the federal government for entry into the country.

In the arguments to the court, there was a disclosure stating that he tested positive for COVID-19 on the 16th of December. However posts by both Serbian postal service and Djokovic seemed to indicate that the athlete made mask-free appearances throughout Serbia on Dec 16th and Dec 17th. Among those appearances also included an event  hosted by the Tennis Association of Belgrade, attended by multiple young, unmasked children. Although this observation was later disproved in a statement by Djokovic and his press team, speculations regarding the covid test as well as Djokovic’s appearances continue to headline across various media 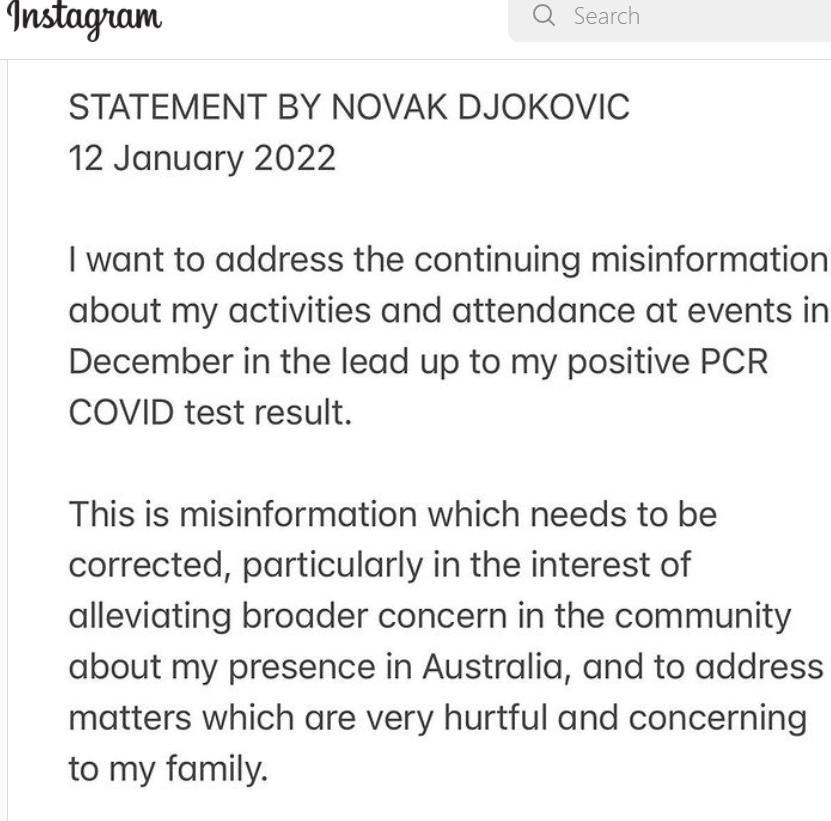 The tennis star’s  list of troubles were only starting though. As he battles the Australian government, the record nine-time Australian Open winner has a lot at risk ahead of him. Djokovic and his agents have caused other administrative errors which on revelation have created their own separate controversies. Definitely a display of irresponsibility with multiple countries infuriated at Djokovic and his team’s negligence for Covid safety. According to the response to the deportation appeal document, the Australian government retained the right to detain the tennis superstar immediately after the court decision was reached on Monday the 11th.

So even as the judge ruled in favour, the threat of visa cancellation still looms over the tennis star’s head. Australian PM Scott Morrison still believes that expected authorities should be implementing government policy and Immigration Minister Alex Hawke still holds the power to cancel the visa.  Australian federal law prohibits anyone with a cancelled visa from re-entering the country for three years.

Djokovic missed out on crucial practice time while he was detained at an Australian quarantine facility and was finally moved out of government detention just days before his scheduled first match. With the risks so high, this could definitely cause quite the disturbance in the career of the current ATP number 1 tennis player in the world if the situation isn’t handled properly.