Walking down the literal memory lane isn’t easy anymore- for the lanes themselves have changed into roads. Gigantic trees that would once bless you with their soothing canopy on a hot summer day are nowhere to be seen- because, as you inch closer, you’ll just see  large stumps of those ancient trees. Plants like touch-me-not would once adorn the sidewalk and an idyllic evening walk would be incomplete without closing a couple of these shy leaves! But these innocent plants have now been replaced by crude cobblestones.

We have developed- but at a cost.

In the urban areas, cutting down trees has made way for larger roads and the number of skyscrapers has skyrocketed. Larger roads have made way for heavy road traffic and skyscrapers have contributed to a denser population- this is the perfect recipe for an Urban Heat Island! An Urban Heat Island occurs when a city experiences much warmer temperatures than the surrounding rural areas, partly due to the aforementioned human activities. Now it’s easy for us to just turn on the air conditioning and forget about this! But, air conditioning adds fuel to the fire by contributing to an even hotter UHI. A hotter UHI is lethal as it disturbs the local ecosystem- including the local population and the local economic ecosystem as well. Data shows that heat waves are more lethal and result in higher mortality than any other extreme weather event. Which is why tackling this issue, sans a band-aid solution, is the need of the hour.

Thankfully for us heat-affected mammals, this issue is being studied and solutions for the same are being developed. We’re talking about Cooling Singapore– which is one of the coolest projects ever!

If you’re a summertime tourist in a tropical country like Singapore, you’ll surely be distracted by the scorching heat around you as you head outside your air-conditioned hotel room. But unlike us tourists who can return to our cooler homes, the residents of Singapore are subjected to this kind of weather all year round. Thus, in order to help moderate the rising temperatures and combat the vicious cycle of the UHI effect, the government of Singapore is supporting several projects- one of the notable among them being the Cooling Singapore project.

The Cooling Singapore project was launched in 2017 with the objective of cooling the outdoor environment of the red dot island. In its initial phase, the team is said to create a virtual model of the city, called the Digital Urban Climate Twin (DUCT) of Singapore, by factoring in related models (like environmental, industrial, traffic etc.) as well as regional and micro-scale climate models to test out the various cooling ideas. Consequently, building upon the findings derived in that phase, the team will collaborate with government agencies to study the UHI effects of buildings, transport, industry and come up with strategies to mitigate them after which they will test them and implement them accordingly. 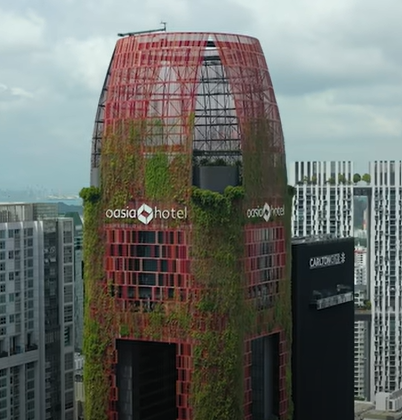 According to scientists, the Cooling Singapore project could pave the way for the governments of other countries to undertake similar efforts to reduce energy consumption and help fight climate change- which ultimately helps improve the quality of life. Combining this scientific approach with a very well established urban design and adding the condiments in the form of the cooperation between government agencies for combating climate change is what makes this project so special.

Thus, it stands to reason that modern, development-aiding urban infrastructure need not be accompanied by a trade-off with the good of the environment. Since cities are veritable centres of growth, agglomerations of dense populations and diverse ideas, they are instrumental to the development process in that they allow the specialisation of labour and increased efficiency in the delivery of civic amenities. This project, one of many around the world, is testament to the goal of sustainable development . Thus, researching for ways to reduce the UHI effect is hence leading us towards a more sustainable economy.