Are the pyramids overrated?

“the pyramids of Giza are not overrated”

I first came across this on Instagram a few days ago. I was disappointed, to say the least. The Great Pyramid of Giza is one of the seven wonders of the world, and the oldest one at that.

My own tryst with the pyramids began when I visited Egypt back in the summer of 2019, and I was thrilled, to say the least. The pyramids have evoked a certain sense of awe and wonder in me ever since I was a child. I suppose one could blame the Mummy trilogy or the various “mysteries of the Egyptian world” themed games that I played- the excitement was real! Cut to the day when I actually saw the pyramids for the first time from the plane: I couldn’t believe my eyes, they looked so tiny yet so majestic even from thirty-five thousand feet above sea level. 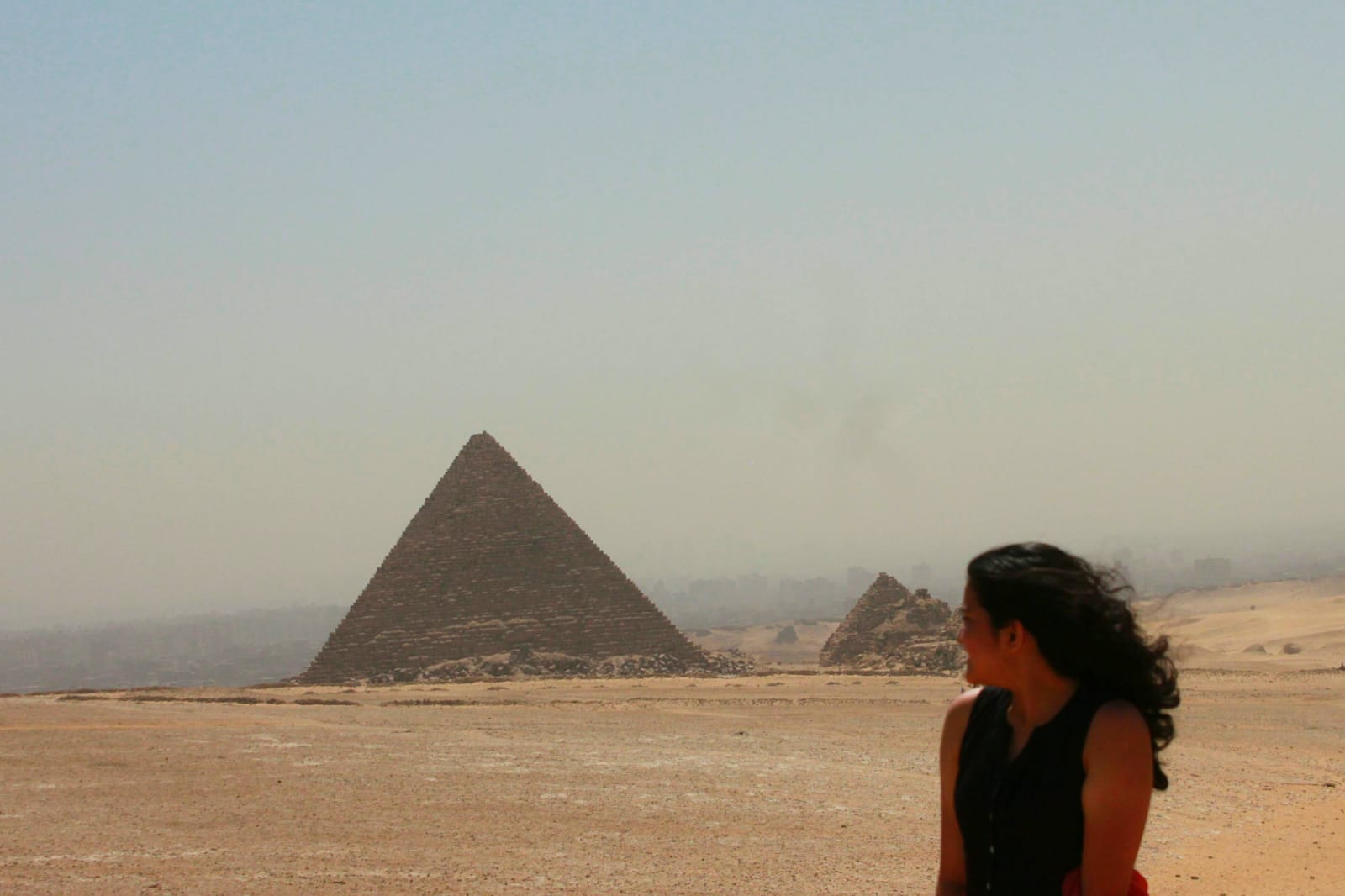 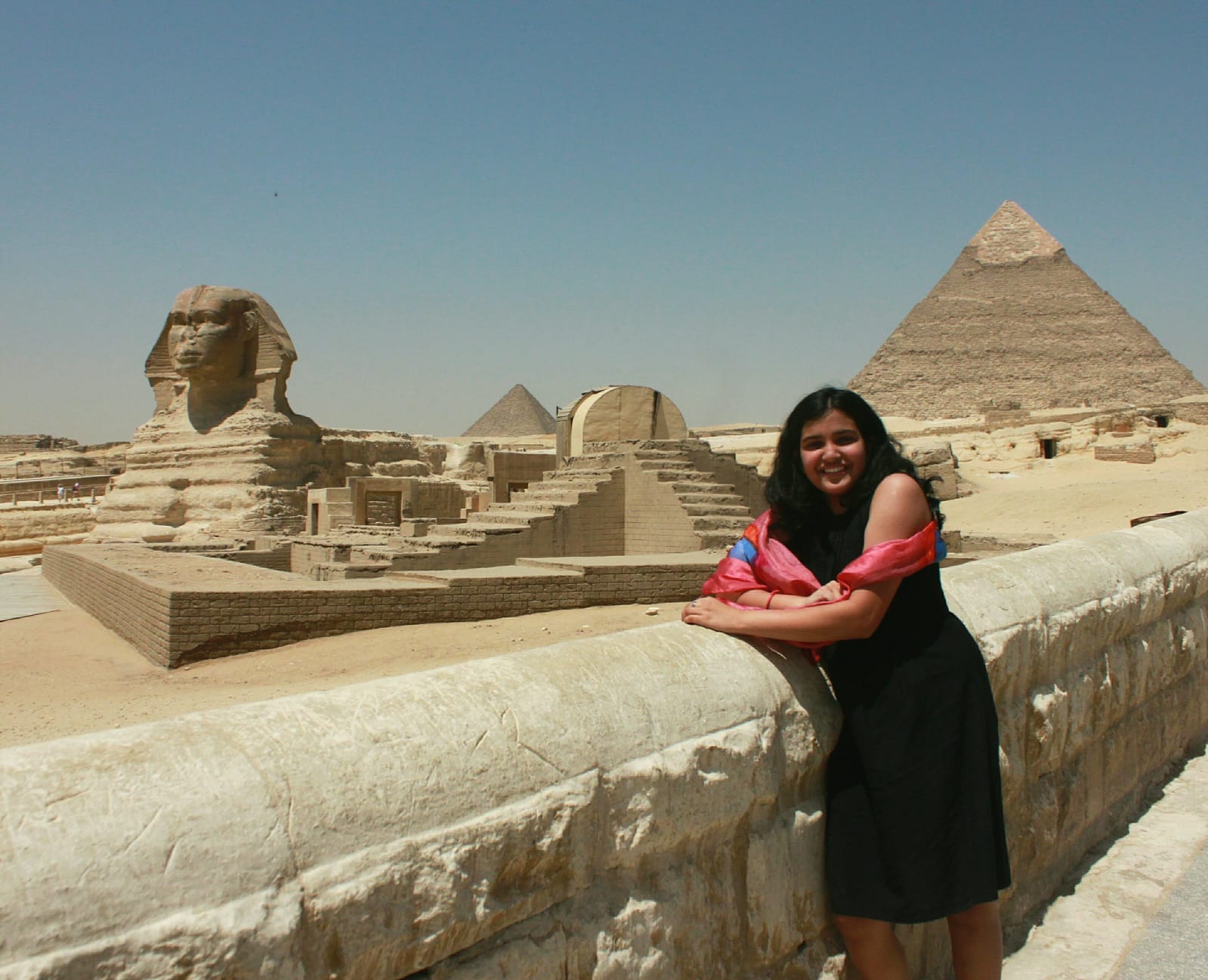 The Pyramids of Giza were built as a witness to the grandeur of the Fourth Dynasty of ancient Egypt, also known as the Golden age. It was a time of great peace and prosperity, fuelled by rich trade with civilizations inland as well as overseas. These pyramids were to serve as tombs for the great Pharaohs of the Dynasty. The largest one was built by King Khufu and is called the Great Pyramid, the Pyramid of Khufu, or Cheops. The other two constructions are relatively smaller. These were built by Khufu’s son and grandson– Pharaoh Khafre and Pharaoh Menkaure respectively. These pyramids, located on the outskirts of Cairo, are part of the Giza Necropolis complex along with other associated pyramids and the Great Sphinx of Giza.

Seeing them in person, I could hardly believe that these pyramids, in all their majestic glory, were the real ones and not plaster copies found in theme parks. The sun was raining gold from a pristine blue sky. The weather was hot but not bothersome- what’s a little toasty weather when you’re standing in front of the Great Pyramid! It took us a while to absorb the grandeur and sheer size of the pyramids. They are huge enough that while clicking pictures, it is impossible to fit them in one frame unless you use a wide-angle lens, or you back up a fair distance. Moving closer to the pyramids just left us even more amazed. Let me give you a bit of context- I am 5’5 in height, and each block used to build the pyramid came up to my chest. The Great Pyramid was constructed using approximately twenty-three lakh such huge limestone and granite blocks, the biggest of which weighed around three thousand kilograms.

The pyramids were constructed in the Bronze Age; no iron or steel tools could have been used for their construction. There were no systems of pulleys invented at that time either.

So how exactly were these giants built with such precision and skill that they have survived the test of time and still stand tall? The exact answer is shrouded in mystery but some hypotheses have been put forward. The most likely and famous one of the lot is that the ancient Egyptians used ramps with a twenty percent incline covered with wet sand to drag the huge limestone blocks along to their final resting place on the main body of the pyramid.

According to Daniel Bonn of the University of Amsterdam, wet sand meant less friction, so what the Egyptians saw as the ceremonial wetting of the sand was actually an ingenious technique adopted to aid the construction of these tombs. Some researchers also suggest that spiral ramps (like a road winding around a mountain) were used on the exterior as well as the interior to place the limestone blocks on the top. The limestone used to build most of the structure was extracted from quarries near the site. However, the granite that is used in the interior to construct the burial chamber was brought from a quarry in Aswan. This quarry is more than eight hundred kilometers away and the huge granite blocks were transported using ships on the Nile. It is said that the pyramids were also once covered by a smooth limestone finish that was polished till it shone like gold under the harsh Saharan sun. In fact, you can actually see remnants of this smooth casing near the top of the Great Pyramid. No trace of it remains on the other pyramids.

You can also enter the pyramids, and actually stand in this place of ancient history and culture. We entered the pyramids through an opening on one of the faces and a passageway led to the king’s chamber that supposedly housed the sarcophagus in a stone vault. Navigating this path required a good bit of maneuvering on our part: the roof often sloped low and we had to hunch over, and the path itself was a steep slope, sometimes upwards and sometimes downwards. Wooden slats on the floor and railings on both sides helped us keep surer footing, but it was  a workout all the same

If you are anything like me, when you’re actually inside the pyramids, you can’t help but think two things: first, “I can’t believe that I’m actually inside the Great Pyramid” and second, “Wow! It’s really chilly here”. It’s true, the dark and cool interior of the pyramid is a sharp contrast to the parched, bright Sahara outside.

The passage to the chamber is a long, mysterious one. What lay at the end of this long walk didn’t disappoint us. The king’s chamber is not rich with paintings, carvings or any of King Khufu’s treasures. It is brimming with history, a sense of wonder, and the knowledge that here lies the king who gave us the pyramids of Giza.

Who built the pyramids? Who did all the work and helped haul these humongous blocks into place? For the longest time, historians believed that the twenty thousand people involved in its construction were slaves. However, a workers’ village and cemetery discovered in the 1990s proved that they were actually civil servants who were well taken care of. They had access to surprisingly advanced surgical and health facilities (like accurate and clean amputation of limbs) and enjoyed a protein-rich diet, unlike the other inhabitants of the region.

The result of all this back-breaking labor (sometimes literally) was a colossal and mighty feat of architecture, so great that even after 4500 years they are still considered as one of the seven wonders of the world.

Such grandeur inspires its own set of imaginative theories. One exciting yet controversial theory about the construction of the pyramids is that the ancient Egyptians had extraterrestrial help in their construction. Those who propagate this theory believe that lifting and moving such heavy blocks of limestone is impossible without antigravitational powers.

Apparently, even Elon Musk believes that aliens gave the ancient Egyptians a helping hand– in 2020, the SpaceX and Tesla CEO tweeted that the pyramids were “obviously” constructed by aliens.

Pyramid Power is yet another mystical side to the Pyramids. It is the belief that the shape of the pyramid deflects rays of energy from the sun towards its base, and gives rise to unexplained phenomena like preserved food, maintained sharpness on razors and blades, and improved health. Some people who have meditated inside the pyramids have experienced an altered state of consciousness and even extreme elation. Even our tour guide in Egypt recounted her own experience of a miraculous recovery from a bone injury that otherwise could only be surgically corrected. Even though several skeptics have contested this theory and even an episode of the MythBusters has tried to do the same, the popularization of pyramid power continues.

The only word that I can use to explain the feeling that I felt on visiting Egypt and the Giza pyramids, is awe. Awe at how grand and majestic the empire must have been at its pinnacle, awe at the architectural precision and knowledge that went into their construction, awe at just how mysterious yet inspiring the pyramids are, and awe at how humanity, in its quest for immortality, can create wonders. In the four thousand years that these pyramids have stood tall on this planet, they went from being an architectural marvel to being forgotten to becoming one of the seven wonders of the world. They epitomize how everyone moves on with time, and nothing in this world is really permanent. In some ways, through their unshakeable permanence, the pyramids give us a lesson on the transience of life.

*All images used in this article belong to the author.