Budget 2022: The current favourite topic of the country. Dissecting the budget and looking at patterns and trends of the governments is the favourite activity of those in the field of economics— and others too! Keeping up with this tradition, we are going to take a look at the past and present as well as the political trends of disinvestment.

Breaking from its tradition of the last 3 years of setting ambitious disinvestment targets, the Centre has pegged the next year’s target at a conservative INR 65,000 crore . The amount is  to be raised from the privatisation of big players like the Bharat Petroleum Corporation (BPCL) and Shipping Corporation of India (SCI). Even the disinvestment targets of FY 2021-22 have been reduced by over 55% to Rs. 78,000 crore as many of the big ticket privatisation proposals have been delayed, leaving only the upcoming LIC IPO  to achieve the government’s goals.

To brush up some basics, disinvestment refers to the sale of shares of Public Sector Undertakings (PSUs) by the government. There are two major reasons why disinvestment is undertaken: one is to provide fiscal support to the government and maximise resource utilisation for public welfare and the other, to improve the efficiency of the enterprise.

There are three different approaches to disinvestment:

Now, turn the time wheel back to 1956. According to the Industrial Policy of ’56 , 17 industries were reserved exclusively for the public sector and there were 12 other industries that were to be progressively state owned.

Fast forward to 1991, the government was as good as forced to adopt the LPG policy, also known as the policy of Liberalisation, Privatisation and Globalisation. The domestic economy had finally started welcoming private players. Only 8 industries were reserved for the public sector, among them defence equipment production, atomic energy, mining and railways, thus, bringing an end to ‘red-tapism’ or industrial licensing to a great extent. Chronically sick PSUs were referred to the Board for Industrial and Financial Reconstruction (BIFR) and a separate committee under C. Rangarajan was set up to develop guidelines for disinvestments.

Another first in the government’s LPG policy was the feature that allowed financial institutions and mutual funds to buy shares upto 20% of selected profitable PSUs on the condition that they hold the shares for a specified period of time before selling them.

The first turning point in the history of disinvestment dates back to 1999. Atal Bihari Vajpayee set up a dedicated ministry and separate Cabinet committee for the same during his term as Prime Minister heading the NDA government. 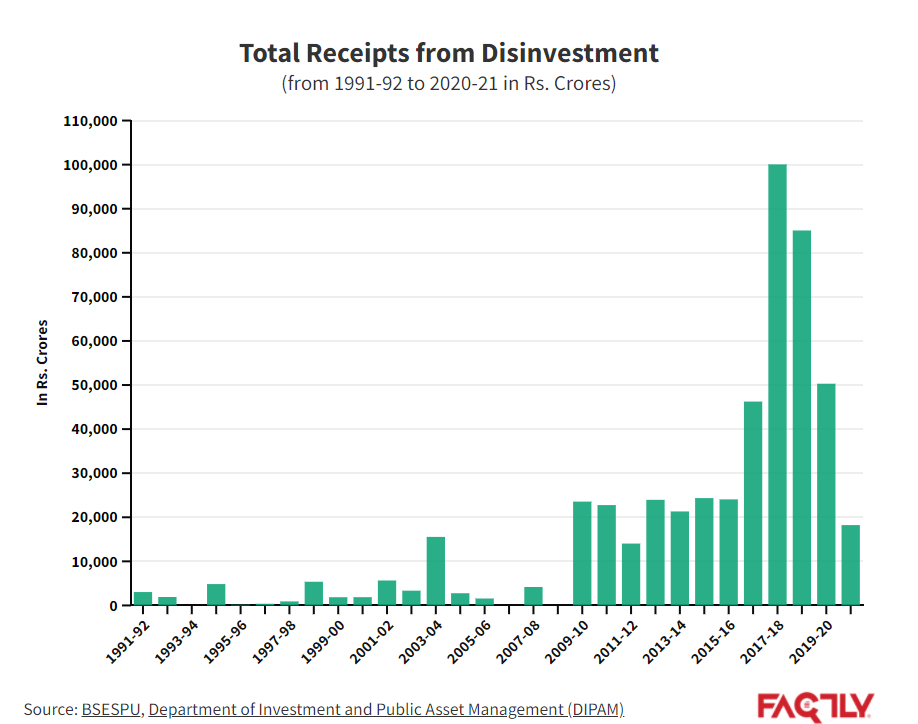 Despite heavy opposition from inside the government and the bureaucracy, as well as from the party’s ideological father, the Rashtriya Swayam Sevak Sangh, the NDA government was able to sell as many as 12 PSUs . How did these companies fare in private hands?

Modern Foods, the first company to be privatised, was sold to Hindustan Unilever in 2000 and now, after changing hands several times till 2021, the FMCG company has a 35% share of India’s bread market and a revenue of Rs. 400 crore.

Maruti Udyog (now, Maruti Suzuki) was sold to Japan’s Suzuki Motor Corporation. Today it is India’s biggest carmaker with a 30% share of the market.

Videsh Sanchar Nigam Ltd. which was bought by the Tata group and renamed Tata Communications has more than doubled its annual revenue to Rs. 17,000 crore since its privatisation.

Several others like the hardware maintenance company CMC and fertiliser company Paradeep Phosphates have also benefited immensely from their privatisation.

On the other hand, data from the Department of Investment and Public Asset Management (DIPAM) indicates that the UPA-I and UPA-II  governments headed by former Prime Minister Manmohan Singh did not take enough interest in disinvestment programme and interrupted the long term growth story of India. They focused on PSUs mobilising resources through the capital market and strengthening loss making PSUs, while selling off only the chronically unprofitable ventures with due compensation for the workers.

This draws our attention to the politics of disinvestment. Jain and Sarkar, in their research conducted in 2017, found disinvestments are higher when pursued by the right leaning political parties, including coalition parties with similar ideologies, than by left leaning parties. The study also hypothesised that the more the Centre and State cohesion in ideologies, the more disinvestment prospects improve .

One of the reasons behind this could be the reliance of Congress led governments on outside support from left leaning parties like CPI-M , which have conflicting views on this topic.

Coming back to the present, the Modi government has been doing a fairly good job with respect to disinvestment. They started the long-stalled privatisation programme with the successful sale of Air India back to the Tata group, 68 years after the government first nationalised it. While this ended the long wait for Tata Sons, it is only the first step for Prime Minister Modi’s challenging privatisation road map, seven years after he first took office. The NDA-IV government aims to sell more than two dozen PSUs. As mentioned earlier, BPCL, SCI, LIC are its big ticket prospects.

Apart from these, the government also wants to reduce the number of PSU banks  in the country through privatisation. However, their weak performance and low valuations are seen as hurdles in the process.

The government’s move to sell the Vizag Steel Plant has met with opposition in Andhra Pradesh with workers and unions staging frequent protests. But if the Air India deal is anything to go by, the employees may receive protection after the sale. The Centre has mandated Tata Sons to retain all employees for 1 year and if any of them are laid off later, they must be offered a Voluntary Retirement Scheme. This deal has signalled that the government is willing to offer better terms to bidders to give a fillip to its privatisation plan.

Whether the government is able to monetise all these big ticket sales and achieve its targets, only time will tell, but the private sector is definitely in for a ride!