THE CARD AND KRUEGER PAPER

David Card was awarded half a Nobel Memorial Prize in 2021 in economic sciences for his contribution to labor economics, that is, the minimum wages and employment paper that he wrote with Alan B. Krueger.

Card and Krueger wrote the paper called “Minimum wages and employment: A case study of the fast food industry in New Jersey and Pennsylvania” in 1993. The crux of writing this paper was to find out how the employers respond to an increase in the minimum wage; since the prediction from the conventional economic theory is somewhat unambiguous. Though the studies in the 1970s based on aggregate teenage employment rates usually confirmed the prediction that a rise in minimum wage leads perfectly competitive employers to cut employment, earlier studies(Richard A. Lester, 1960) based on comparisons of employment at affected and unaffected establishments (that are affected by minimum wage increases) often did not. But this paper provides evidence on the effect of minimum wages on establishment level employment outcomes. 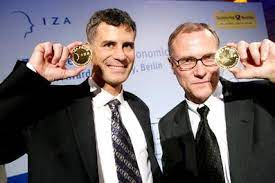 In early 1992, Card and Krueger began to evaluate the iminent increase in the New Jersey minimum wage by surveying fast food restaurants in New Jersey and East Pennsylvania and they came to a conclusion.

“Contrary to the central prediction of the textbook model of the minimum wage, but consistent with a number of recent studies based on cross-sectional time-series comparisons of affected and unaffected markets or employers, we find no evidence that the rise in New Jersey’s minimum wage reduced employment at fast-food restaurants in the state”

They found that the increase in the minimum wage increased employment.

They provided a variety of alternative specifications to probe the robustness of the conclusion. None of the alternatives showed a negative employment effect. Even after checking the findings for the fast food industry by comparing changes in teenage employment rates in New Jersey, Pennsylvania, and New York in the year following the increase in the minimum wage, these results pointed towards a relative increase in employment of low wage workers in New Jersey.

Card and Krueger also investigated the causal relationships between state investments in public schools and the academic performance of students and their later success in labor markets. Their work disproved another conventional notion of labor economics, that resource levels in public schools have little impact on individuals’ academic performance or economic opportunities in later life.

The both of them devoted their research in economics to immigration, education, job training and equality. Though Card was awarded with the nobel prize for this paper, he was still criticized for his research. “I’ve subsequently stayed away from the minimum wage literature for a number of reasons,” Card said in an interview years later. “First, it cost me a lot of friends. People that I had known for many years, for instance, some of the ones I met at my first job at the University of Chicago, became very angry or disappointed. They thought that in publishing our work we were being traitors to the cause of economics as a whole.”

But the effects of their research remained. Both critics and supporters of minimum wage have gotten less theoretical and more empirical. Though a lot of empirical economists still think minimum wages cause job loss; others argue that the employment effects of most hikes in wages  are minimal, and swamped by the reduction in poverty that the increased wage itself generates.