The Everest Of The Ocean And The Thrill Of The Surf.

You are surrounded by water and are being tossed and thrown around in the ocean like a rag doll. You are underwater and can’t seem to find an escape, no ray of hope, no ray of sun, you are trapped in a watery grave. All you see are swirls of blue, white, and green and all you remember is your passion for surfing and catching the biggest wave in the world at Nazaré. 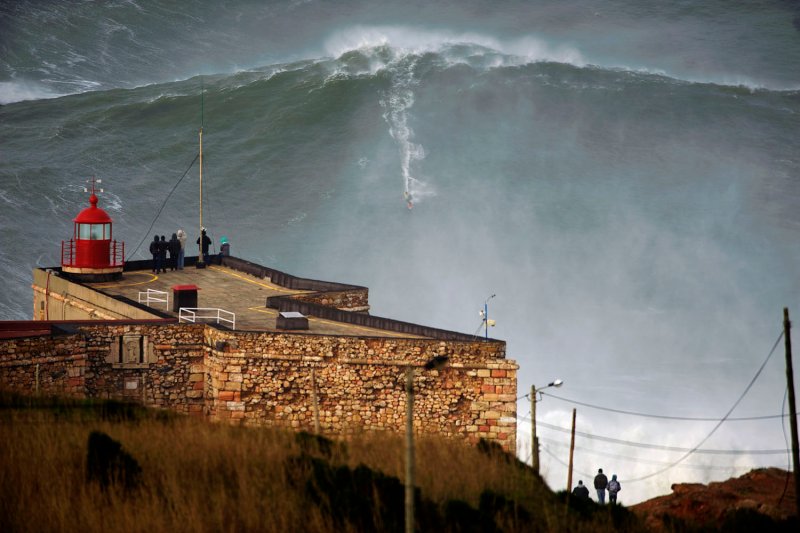 This most probably is the story of every surfer who has had the courage to venture into the tumultuous waters of Nazaré, Portugal and was wiped out (fell off one’s surfboard) trying to ride some of the biggest waves on earth.

Praia de Norte or North Beach in Nazaré is a coastal location where one can find the biggest surfable waves on earth and has recently become a well-known spot for big wave surfers from all over the world. This is the reason why the American surfer Garrett McNamara called the waves at Nazaré “the Everest of the ocean”, he believes that they are greater than (literally) and in a sense, superior to all the other waves.

But what exactly is big wave surfing?

Big wave surfing is a practice within surfing that involves professionals riding waves that are at least 20 ft. in height. This is either achieved by paddling onto these humongous waves or by being towed onto them using jet skis. The method used to approach the waves as well as the size of the wave is what determines the shape of the board that the surfer uses.

Portugal has been a go-to surfing destination for a while now (especially Peniche and Ericeira) but no one really knew about or went to Nazaré. With the waves being as humongous as they are, the thought of reaching and then riding them intimidated many as even paddling onto them was physically impossible.

All this changed with the advent of tow-in surfing which was introduced in 1992 by big wave surfers such as Laird Hamilton and Darrick Doerner. This crossover sport enabled professionals to be towed onto massive waves on jet skis, generating enough speed and momentum that made riding these water giants a reality. In fact, by the end of the 1990s, it was because of tow-in surfing that surfers were able to ride waves exceeding a height of 50 ft.

Dino Casimiro, a local bodyboarder from Nazaré tried contacting almost all big-wave surfers to inform them about the gem that was his hometown; but in the end, was only able to contact the American surfer Garrett McNamara in 2005. Initially in disbelief, McNamara himself flew to Portugal to confirm Casimro’s tall claims about Nazaré and was certain that his life was about to change when he looked down at the monstrous waves from the lighthouse. For him this was the 100 ft. wave that he had been looking for his entire big-wave surfing career, it was the holy grail. It was like stepping on the moon- conquering something so unfathomable for the very first time exhilarated him. Thus, he also termed the waves of Nazaré as the “Everest of the ocean” as it was like conquering Everest, at least for him.

“a Burger” ie. waves that don’t really curl in the classic way as they are mushy and swollen with water. But McNamara’s historic ride along the 78 ft high wave in 2010 changed the fate of the sleepy town of Nazaré forever. This historic feat earned him the Guinness book of world record title of having surfed the largest wave ever until the Brazilian surfer- Rodrigo Koxa nudged up the mark to 80 feet in 2017, also at Nazaré. It was only when McNamara’s record made it to the newspapers that the community finally and slowly came to accept Nazaré.

Today surfers from all across the globe come to Nazaré to surf through its giant waves. The coastal destination is increasingly sought after by surfers, photographers, and tourists from around the world because of its beauty and natural splendour.

The big-wave season at Nazaré lasts from October to March and this is the time when the annual WSL Nazaré Tow Challenge event also takes place. This challenge only lasts for a day and its basic purpose is to set new surfing records and to beat the old ones. In fact, McNamara is certain that if someone were to catch a 100 ft wave someday- it would undoubtedly be at Nazaré. There have also been years when the event was altogether postponed due to the sheer size of the waves…they were just too big!

For centuries the local fishermen have feared the monstrous waves at Praia de Norte and the North Beach was always off-limits. The local fishermen back in the day went out to sea but more often than not never came back. “So, it’s always been a place of death,” says McNamara in an interview with The Guardian.

The story of the monstrous surf at Nazaré began 150 million years ago when the underwater Nazaré Canyon was formed. Such humongous waves are typically formed when the water goes from a very deep to a very shallow gradient and this is why most of the big wave hotspots are located near islands. The Nazaré Canyon is 7,39,200 ft deep and runs from out in the sea just to end abruptly at the North Beach at Nazaré. As the incoming ocean swell rushes over the canyon the gorge acts like a magnifying glass and refracts the waves towards its centre. This phenomenon mixed with the sandbar ocean floor and the local water current is what gives rise to the gigantic waves that characterize the town of Nazaré.

The thrill of surfing at the best big wave hotspot is definitely exhilarating but it comes with its own set of dangers. Watching the clips of the surfers being wiped out as they ride the almost 100 ft tall water giants is both terrifying as well as mesmerizing. A wipeout at a place as dangerous as Nazaré can push the surfers down to as far as 20-50 feet deep. Wipeouts such as these often send the surfers spinning out of control and leave them disoriented. They are tossed and thrown around in a confusing whirlpool of water with such force that they often sustain career-defining injuries like head trauma, spine injuries, paralysis, ruptured eardrums (because of the pressure at such depths), etc.

Despite the dangers, the surfers still show up at Nazaré every year to ride the winter swell. This is because no amount of danger can falter one’s passion. After a while, it’s less about the dangers and more about the challenge, skill, and self-satisfaction that one experiences because of the sport. It’s more about riding the Everest of the ocean than it is about the inevitable end and this is the true spirit of sportsmanship, because “what’s life without a little risk”?

BSc@GIPE > The 8:10 Newsletter > HOME > The Everest Of The Ocean And The Thrill Of The Surf.